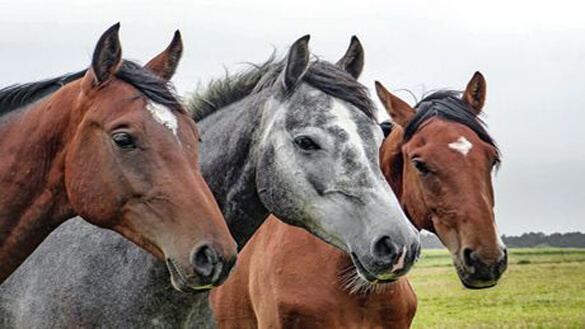 Farmer Brown had seventeen horses on his rural farm.

In his will he instructed that upon his death the horses should be distributed to his sons as follows:

After Farmer Brown passed away, the executor of his will took the three sons out to the pasture field to distribute the horses according to their father’s wishes.

After the sons had rounded up and corralled the horses the executor began reading the will.

Unfortunately, he quickly realized that he had a serious problem…

Since there were 17 horses there was no way to distribute them as directed by the will and make the math work as intended.

The four men stood there for several minutes trying to come up with a solution to the problem.

All of a sudden they saw a young boy coming down the road on a pony. That gave the executor an idea. He yelled and asked the boy if he’d be willing to help him out of a jam.

He said he’d be happy to help out so they opened the gate to let him bring the pony into the pasture field.

After they had placed the pony in the corral with the horses, that made a grand total of 18 animals. The executor got right to work…

After the task was finished everyone saw that the 17 horses had been distributed exactly as Farmer Brown had wanted all along.

They no longer needed the boy’s pony so they thanked him and sent him on his way!

See, math really can be fun!

And now, I invite you to check out this short video that features several more really cool math tricks!