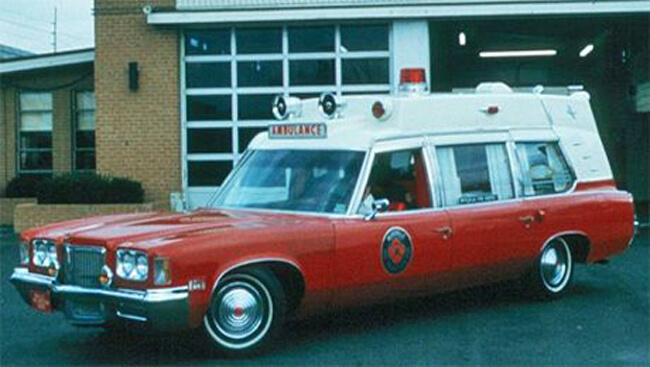 Most everyone is familiar with the distinctive look of the typical modern ambulance, but there was a time when ambulances looked much different.

Prior to the Civil War virtually all ambulance services existed to transport wounded soldiers from the battlefield to the nearest hospital or clinic.

Their extensive use during the Civil War made folks aware of just how beneficial ambulances could be to the general public.

When the first civilian ambulance services were created, guess who it was that stepped in to create most of them?

Funeral homes! And there’s a simple reason for that…

Since hearses are built to carry coffins, they are perfectly suited to also carry stretchers!

And since funeral home personnel have always received training in basic emergency medical care, it was an obvious fit.

Even as late as the mid-20th century about half of all ambulance services were still provided by funeral homes. What’s more, most funeral homes had at least one hearse that was used elusively as an ambulance.

But that all changed in in 1966 after Congress passed the Highway Safety Act.

That new law set regulations on ambulance design as well as the types of training and equipment the emergency medical providers that manned them would have to have in order to remain in operation.

Those new standards made it very difficult for funeral homes to remain in the ambulance business.

That opened up an entirely new industry for companies whose primary mission was providing emergency medical care and transportation services.

Bottom line: Thanks to the Highway Safety Act of 1966 you no longer have to worry about the possibility of calling 911 for medical help and having a hearse show up to haul you away!

On a related note, here’s a short video that explains how military ambulance services were transformed from a horribly chaotic state into the precursor of modern battlefield wounded personnel transport services. Check it out!