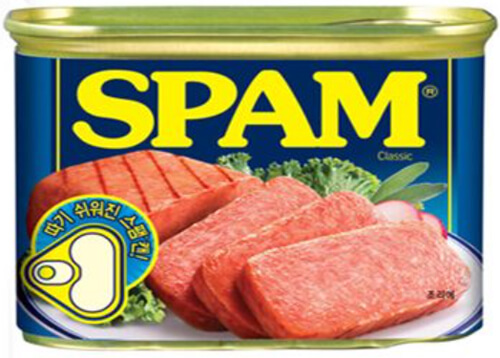 Even if you don’t like it, you’re probably familiar with SPAM.

No, not the hundreds of junk emails that land in your inbox on a daily basis.

I’m talking about the processed pork food item than comes in the weird little blue and yellow can.

Well, as you might expect, we Americans consume more SPAM than any other country in the world.

That isn’t really surprising since Hormel is an American company and the product originated here in the States.

However, you just might be surprised to learn which country eats the second-most amount of SPAM.

If you were to guess one of the other English-speaking western countries it would certainly be a logical guess, but it would be wildly off the mark.

After us Americans, the people of South Korea consume more SPAM than any other country in the world. And they consume a LOT of it.

So how did the Koreans come to love SPAM so much (or even start eating it in the first place)?

Well, it all started because of the Korean War…

The packages of field rations issued to our American soldiers during the Korean war all contained some form of meat, and one of the most popular of those meat products among the troops was SPAM.

During the war numerous cans of SPAM were shared with the Korean locals who quickly developed a taste for the meat.

Most of the American soldiers left the Korean peninsula after the hostilities ended, but the Koreans’ love for SPAM continued to grow.

Today, SPAM is actually produced and canned in South Korea on an industrial scale by a local company that licensed the recipe and packaging from Hormel.

However, the product that’s produced and consumed in Korea is exactly like the American version, and it’s just as beloved.

After all these years the Koreans love SPAM more than ever.

They love it so much in fact that it’s considered a great honor to receive it as a gift on Korean holidays.

Interestingly, the Koreans don’t just eat SPAM on sandwiches. They actually incorporate it into a wide variety of traditional Korean meals.

Here’s a short video featuring a special Korean soup that’s made with SPAM. Check it out!