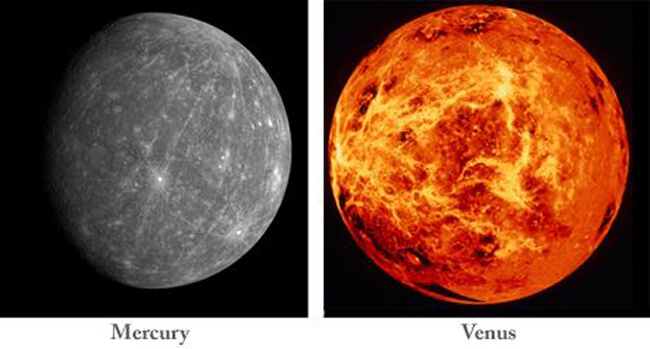 That’s right, with temps as high as 870 degrees Fahrenheit, Venus is actually hotter than Mercury which “only” gets as hot as 800 degrees.

The reason Venus is hotter than Mercury even though it’s farther from the sun is because Venus has a very thick atmosphere.

That atmospheric “cover” traps much of the heat Venus receives from the sun and prevents it from escaping back into space.

This phenomenon is commonly referred to as the “greenhouse effect”.

Have you ever hopped into your car on a very cold, but bright, sunny day and found the temperature inside the car to be relatively warm compared to the outside air?

That too is a result of the greenhouse effect.

By the way, this same greenhouse effect keeps our own planet Earth warm enough to support life.

The difference here is Venus’ atmosphere is so thick that the greenhouse effect there is many times more powerful than it is here on Earth.

Even with her atmospheric “cover” Earth still manages to “leak” most of the heat that arrives here back out into space. That’s why Earth manages to maintain a relatively stable temperature from year to year.

And now, back to Mercury…

Yes, Mercury is indeed the closest planet to the sun so it naturally receives the most heat from the sun’s powerful rays.

But since Mercury has no atmosphere to trap that heat, the vast majority of it is radiated right back out into space.

Even so, like Venus, Mercury is an extremely hot planet with temps that can reach 800 degrees Fahrenheit.

But unlike Venus’ “stored” heat, Mercury’s heat is primarily a direct result of the intense heat that’s constantly striking the planet’s surface via the sun’s rays.

And now, yet another interesting fact…

At the same time that the half of the planet that’s facing the sun is around 800 degrees Fahrenheit, the other “night” side is unbelievably cold with temps that reach as low as minus 290 degrees!

How can that be, you say?

Well, since there’s no atmosphere on Mercury to trap the sun’s heat and distribute it over the entire planet’s surface, the only heat Mercury has is the heat that strikes the planet via the sun’s rays.

And since the sun’s rays never strike the “night” side of Mercury, that side never receives any heat from the sun at all!

If you were intrigued by this post, I recommend that you watch the short video below for even more amazing info about Venus!