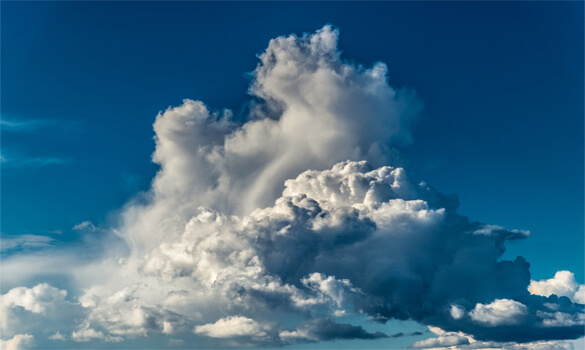 As we all know, clouds are full of water, and lots of it.

And we also know that water is relatively heavy at a little over 8 pounds per gallon.

So how heavy are the clouds we see floating in the sky above us, and how can they float without falling to the ground?

I did some research on this topic and according to scientists at the US Geological Survey, an average size cloud can easily contain more than a million pounds of water!

The thing is, all that water isn’t in one huge glob like the water in your bathtub or swimming pool. Instead, it’s dispersed throughout the cloud in the form of gazillions of tiny water droplets or ice crystals.

The water droplets or ice crystals in most clouds are so lightweight and have such a small surface area that they won’t easily fall to the ground.

Therefore, they “float” in the air much like the dust you see “dancing in the air” in a dark room when light comes streaming in through a window.

What’s more, those minuscule water droplets are spread out over a very wide area.

How wide an area, you say? Well, clouds are massive…

Even the “small” ones you see floating overhead at times are a LOT larger than they appear to be from our vantage point on the ground.

Of course some clouds do in fact fall to the ground, although not as one gigantic body…

The water droplets and ice crystals in clouds tend to grow in size as the clouds move over the planet below.

Once a water droplet or ice crystal grows too large and too heavy to “float” it falls to the earth as rain, snow, sleet or hail.

In other words, parts of the cloud fall to the ground!

Of course the explanation I gave above is a very simplistic one. After all, I’m not an atmospheric scientist or meteorologist.

There are actually many factors that determine how a particular cloud floats and when (or if) it will lose water via some form of precipitation.

If you’d like to read a more detailed (and more scientific) explanation I recommend that you read this article from the experts at Scientific American.

And if you want an even more scientific explanation, check out the short video below.