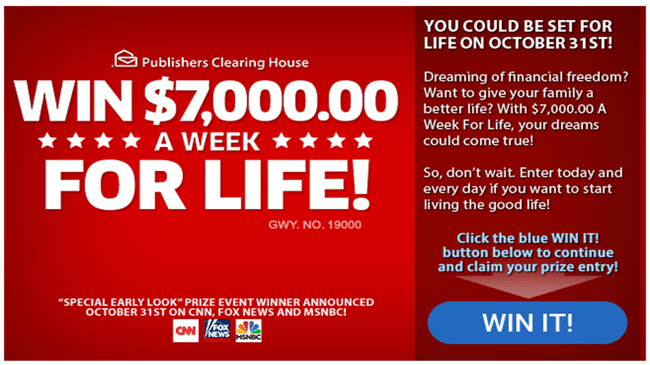 I received an email the other day from someone asking about the Publishers Clearing House Sweepstakes ads we’re always seeing on TV.

Concise and to the point, she asked these two questions:

2 – If so, where do they get all that money to pay the Sweepstakes winners?

Those are great questions, and truth be told, I used to wonder about that as well so I did some research into how it all works.

The answer to the first question is yes, Publishers Clearing House does indeed pay out the cash they promise in their ads to their Sweepstakes winners.

If they didn’t the company’s senior managers would likely end up behind bars and the company would go out of business.

First, lets talk about the actual amounts of the prize money given away to the sweepstakes winners.

Believe it or not, the amounts they award in prizes really aren’t all that much in the grand scheme of things.

Sure, $7,000 cash (before taxes) coming in each and every week would be a life changer for most people if they were lucky enough to win, but that’s a paltry sum for a company the size of Publishers Clearing House.

That means he/she would end up collecting a total of $9.1 million:

That’s a lot of money to pay out for sure, but it’s chump change when you consider that Publishers Clearing House earns approximately $1 billion in revenue, each and every year!

Yep, Publishers Clearing House takes in a billion bucks (that’s 1,000 million dollars!) every year but they get to spread out that measly (by their standards) $9.1 million payout over 25 years.

Note: Publishers Clearing House also pays out lots of smaller prizes to winners of their other contests, but those amounts are only drops in the bucket compared to the huge “Sweepstakes” payouts.

Publisher’s Clearing House is a massive company that’s been in business for 68 years (they were founded in 1953).

Unlike most smaller and younger companies, they have multiple revenue streams coming in on a daily basis:

4 – Advertising revenue from the 11 hugely popular websites they own

As you can see, Publisher’s Clearing House makes a lot of money in a lot of ways. Therefore, yhey can easily afford to pay out the money they promise to their prize winners.

When it comes right down to it, their Sweepstakes payouts are effectively just another advertising expense.

Now, all of the above being said, “Sweepstakes” scams are very real and lots of people lose a lot of money to the scammers every year.

Here’s a short video detailing how one elderly man lost much of his life savings to a scammer posing as Publishers Clearing House.

Bottom line: The Publishers Clearing House Sweepstakes are indeed legitimate and the payouts are real.

Unfortunately, so are the many scams perpetrated by fraudsters attempting to piggy-back off the popularity of Publishers Clearing House’s Sweepstakes.