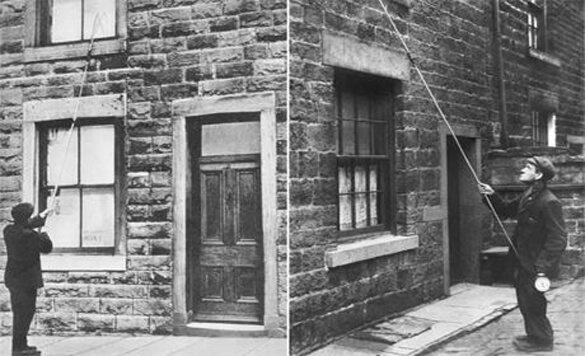 Before alarm clocks became commonplace in homes folks still had to wake up early enough to make it to work or school on time. Have you ever wondered how they managed to do that?

I did some research into this topic and discovered that there used to be an actual profession in which people called “Knocker-Uppers” would go from door to door and wake the workers and school children of the household up.

At first the “Knocker-Uppers” accomplished their mission by banging on the customers’ doors with a stick, a hammer or some type of baton.

But that method was quickly replaced by quieter methods after the “Knocker-Uppers” began receiving rather unpleasant feedback (such as having buckets of water dumped on their heads) from neighbors who didn’t appreciate being awakened on days when they could sleep in.

The “Knocker-Upper” method of rousing sleeping workers began in Britain soon after the beginning of the industrial revolution, and it continued well past the mid-20th century.

The practice began to wind down in the 1950s when the wide availability of affordable (and reliable) alarm clocks ultimately rendered the “Knocker-Upper” profession obsolete.

I wasn’t able to find any information about how workers managed to make it to work on time before the “Knocker-Uppers” came along, but here’s my best guess…

Perhaps being prompt wasn’t considered all that important until people started working in factories on a large scale?

Who knows, maybe your guess is better than mine!

To finish up, here’s a rather interesting short video about the “Knocker-Upper” profession of times past. Check it out!