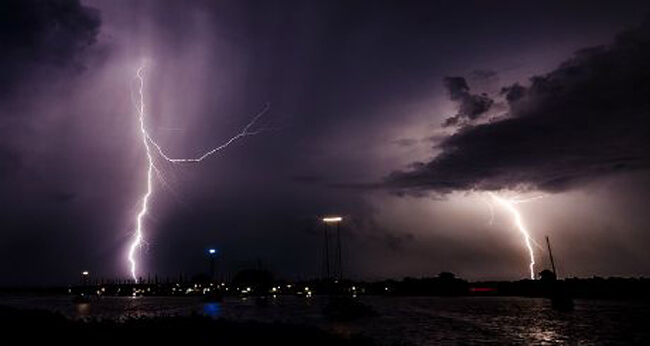 Lightning is one of the most powerful and most awe-inspiring forces in nature.

Just how powerful is lightning? Well, consider this…

A typical lightning bolt delivers around 300 million Volts and 30,000 Amps of electricity!

What’s more, just one large thunderstorm can produce thousands of lightning bolts as it moves across the earth’s surface, inducing awe, fear and fascination in those who witness its passage.

Most people assume that lightning is rare because we only see it when a storm happens to pass through our local area.

But truth be told, it isn’t rare at all.

In fact, according to National Geographic up to 100 lightning bolts strike the earth’s surface (either on land or on a body of water) every second of every day.

And guess what? There are even more cloud-to-cloud lightning bolts than the ones that strike the earth’s surface!

There’s a very simple reason why there are so many lightning bolts occurring at any one time: The earth is a very, very large place!

The surface area of our planet covers an astounding 196,900,000 square miles. That’s a lot of ground and water for storms to form over.

There are numerous electrical storms playing out in various places around the globe at all times, and every one of those storms has the potential to generate numerous lightning strikes.

Bottom line: Just because the sky is nice and clear in your neck of the woods doesn’t mean it’s that way everywhere else.

You can rest assured that someone in another part of the world is watching lightning streak through the sky at this very moment!

And now, I’ll leave you with one final thought…

Not all lightning bolts are created in the atmosphere. They can also be produced by intense forest fires and even volcanoes.

Want to know more about how lightning forms? Watch the short video below from National Geographic.