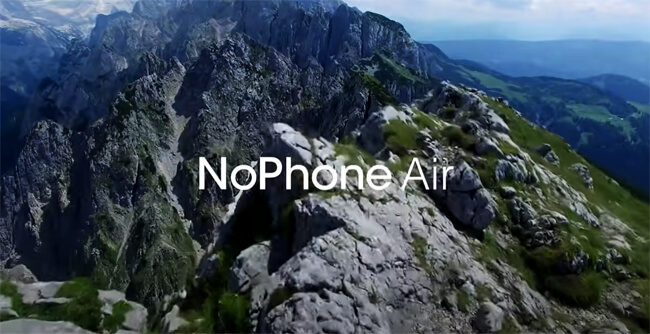 If you’re a fan of Apple’s iconic line of iPhone smartphones you’ll be happy to learn that an even better, and far more advanced successor has finally arrived.

Well, truth be told, it’s actually been around for a while, but I just now got around to noticing it.

The NoPhone Air has several important advantages over any existing iPhone:

1 – You’ll never have to plug it into a charger. Ever.

Yes, you read that right. You’ll be able to talk until the virtual cows come home and your NoPhone Air will have just as much battery charge as it had the day you took it out of the packaging!

2 – Another important advantage of the NoPhone Air is its weight – or perhaps I should say, the lack of it.

Believe it or not, this amazing device is lighter than even the lightest feather. And yes, I do mean that literally.

3 – Perhaps most important of all, the NoPhone Air is extremely discreet.

Thanks to its unique speakerless design you’ll never, ever have to worry about passersby overhearing what the person you’re talking to is saying. They’ll forever wonder who in the world you’re talking to and what they’re telling you.

Of course they’ll still be able to hear your end of the conversation so always, ALWAYS be prepared to explain what you were discussing to a social worker just in case one shows up from out of the blue.

And if you’re concerned about Big Brother tracking you via your NoPhone Air, don’t be.

I can assure you with 100% certainty that neither the FBI, the CIA nor your local police or sheriff’s department has equipment that’s capable of intercepting both ends of a NoPhone Air conversation. You can take that to the bank.

Important: If you take it to the bank be sure to leave your concealed carry sidearm in your vehicle. Just sayin’.

Intrigued, but still not sold? No problem!

Here’s a short video that shows (and describes in detail) what you can expect when you excitedly pop the top on your new NoPhone Air. Check it out…

Of course as you’ve probably figured out by now, the NoPhone Air isn’t really a phone at all.

But that being said, I do love the concept…

Sometimes it helps to just put your real phone down and enjoy life the way it used to be.

I love my gadgets as much as anyone, but I need by downtime as well.

Come to think of it, that NoPhone Air does sound pretty cool right now.