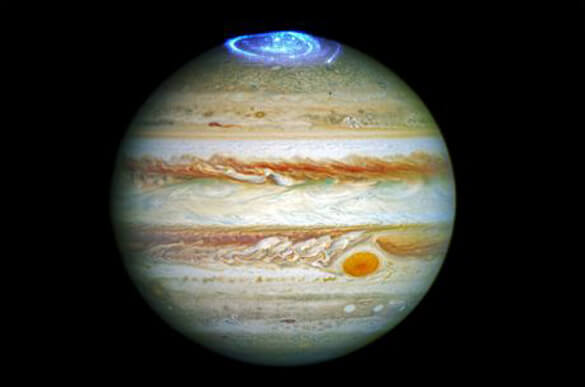 I’m sure you’ve probably seen awesome images of colorful auroras dancing in the air above our planet’s North and South Poles.

The northern auroras are called Aurora Borealis (aka Northern Lights).

The ones over the South Pole are called Aurora Australis (aka Southern Lights).

We earthlings have been marveling at the beauty of our planet’s dancing auroras for millennia, but did you know that some of the other planets in our solar system have them as well?

According to the Department of Astronomy at Cornell University, the aurora are caused by charged particles from the solar wind hitting atoms in the Earth’s upper atmosphere.

The sun emits a stream of electrons and protons called the solar wind.

These charged particles interact with the earth’s magnetic field and are funneled towards the magnetic poles. This is why aurora are (usually) only visible from within the vicinity of the planet’s polar regions.

Based on the information above we can reasonably expect that any planet with both an atmosphere and a magnetic field should have auroras of its own.

And as you can tell from the NASA image above, Jupiter certainly does. And so do Saturn, Neptune and Uranus!

Mars has them as well, but Martian auroras are a bit different from the ones on the other planets due to differences in the way Mars’ magnetic field behaves.

Of course there are no people on those other planets to witness their auroras close up, but thanks to our robotic explorers we can witness them from right here on earth!

Want to watch Earth’s spectacular Northern Lights in action? Check out the short time-lapse video below!

Note: As always, you can watch the video at full screen
by clicking the “square” icon in the lower right-hand
corner of the video.