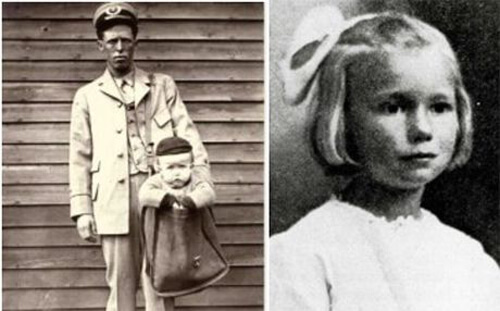 You’re probably aware that the U.S. Postal Service will happily deliver certain live animals on your behalf if you’re willing to pay the postage.

But did you know they used to deliver human children as well?

When the Post Office first began delivering packages via Parcel Post on January 1, 1913, there was no rule saying you couldn’t “mail” a child. So some people did.

Sending a child through the mail cost a LOT less that buying a train ticket back then.

And since postal workers were some of the most trusted people in the country at the time (my, how things have changed) it must have seemed like a no-brainer to the folks that decided to take advantage of the service.

Most of the mailed children were sent relatively short distances (to a nearby town for instance) but some were sent on longer trips.

A six year old Idaho girl named Charlotte May Pierstorff (pictured above on the right) became so famous for being “mailed” that a children’s book was eventually written about her.

A train ticket for young May to travel from Grangeville, Idaho to nearby Lewiston would have cost $1.55 (which was a lot of money in 1913), but the local post office affixed 53 cents in postage to her coat and placed her on a postal train that delivered her to Lewiston for roughly 1/3 the price of the regular fare.

In August 1915, three year old Maud Smith of Kentucky became the last child to be sent through the mail.

Just a few days after Maud’s grandparents mailed her 40 miles so she could visit her sick mother, the U.S. Postal Service placed a ban on the mailing of children.

It’s hard to believe that something like this could have ever been allowed, but for a couple of years, it was!

To finish up, here’s an interesting short video featuring 10 of the weirdest things ever sent through the mail. Check it out!

Note: You can watch the video at full screen by clicking the “square” icon that will pop up in the lower-right corner of the video after it begins playing.