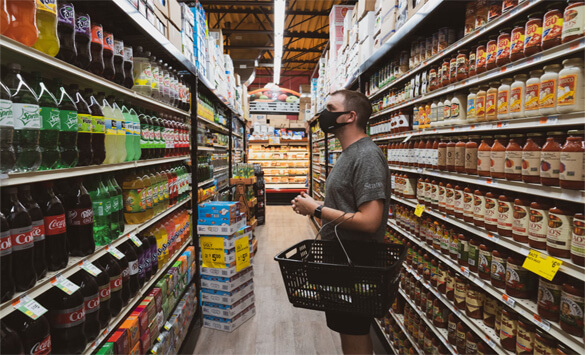 I’m sure you’re well aware of the price hikes that are seemingly taking place on a monthly basis.

Right now we’re all experiencing inflation the likes of which we haven’t seen in decades.

Inflation itself is bad enough, but there’s also something else going on that’s making the situation even worse…

In case you haven’t noticed, the quantities of many of the products we use on a regular basis are shrinking while their prices either stay the same, or even go up.

This is what’s known as “shrinkflation”, inflation’s closely-related, but extremely deceitful cousin.

In a nutshell, shrinkflation is a manufacturer’s way of raising prices in a way that makes it less noticeable while you’re out shopping for the items you need.
Here are a few examples of shrinkflation…

Many products that used to be commonly sold in 64 ounce packages are now being sold in 58 ounce packages (or some other reduced quantity), but that the same (or even higher) prices.

Likewise, paper towels and bathroom tissues are now being sold with fewer sheets per roll.

And don’t even get me started on the 64 ounce “half-gallon” containers of ice cream that now only contain 48 ounces.

The manufacturers are pretty tricky about the new packaging too…

Have you noticed how some peanut butter jars now have curved bottoms instead of the flat bottoms that the jars have always had in the past? That makes the jar appear to be the same size even though it holds several ounces less.

I also saw some Pringles potato chip cans the other day that were taller than the original cans, but slimmer.

The extra height is intended to trick you into thinking you’re getting more chips. And in terms of raw numbers, you probably are.

But compare the net weight of the two packages and you’ll see that the taller can actually contains less product overall (i.e. fewer ounces).

And finally, one last example of shrinkflation in action…

Just a few days ago I purchased a pre-packaged salad from the deli at my local grocery store. I really like these particular salads so I buy them fairly often.

At a casual glance the container I selected appeared to be the same size as the ones I had purchased in the past so I just placed it in the buggy and continued shopping.

But when I opened the salad later that night there was quite a bit less salad inside than I was used to receiving.

Yep, you guessed it – they had curved the bottom of the container inward to reduce the amount of space available for the product.

Of course we’re all irritated at the ever-increasing prices of gasoline and heating oil, but with those products there are no tricks or surprises.

After all, a gallon is a gallon. You know exactly what you’ll be paying per gallon because the price is right there on the pump.

But with groceries, paper products and anything that’s sold in packages, it’s quite different. There’s virtually no end to the ways the manufacturers can manipulate the packages to make it appear that you’re still getting a comparable deal.

What can you do to reduce the negative effects of shrinkflation? Well, here are a few possibilities:

1 – Ignore the sizes and shapes of packages and concentrate instead on quantities (net weight, fluid ounces, number of sheets, etc.). You just might be able to get a better deal by choosing a different size package.

2 – Avoid the temptation to automatically choose the “family size” option because that option is often the most expensive on a per-unit basis.

Yes, I know. We all have our favorites, and there’s absolutely nothing wrong with that.

But truth be told, many “off-brand” items are just as good as the name brands these days. And you’ll never know if something else is acceptable unless you try it.

And now, one final note…

Even though they both result in increased prices, shrinkflation can actually be worse than inflation if it causes you to either make more frequent shopping trips (and therefore use more gasoline) or purchase multiple packages of some items instead of just one (which makes you have to spend more on each trip).

Hopefully the powers-that-be will get both inflation and shrinkflation under control before long. (Don’t worry, I’ll be sure to let you know when you can stop holding your breath.)

To finish up, here’s a short video that explains shrinkflation at lot better than I just did. Check it out!

Note: You can watch this video at full screen. Just click the little square icon in the lower-right corner of the video after it begins playing.