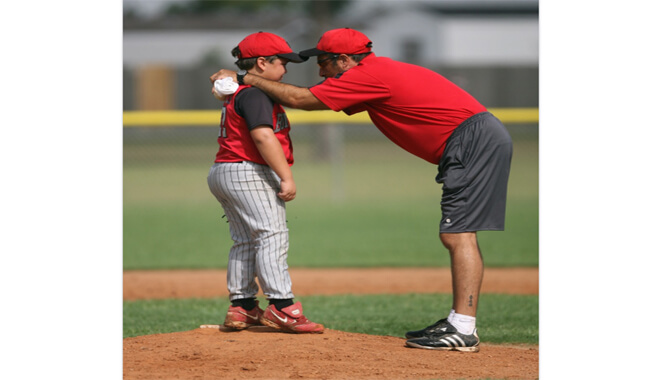 “Your time is limited, so don’t waste it living someone else’s life.”
-–Steve Jobs

Have you ever seen a parent try to coach their child’s Little League team from the bleachers, and attempt to influence or even over-ride the decisions of the coach?

Or perhaps you knew someone who tried to mimic the lifestyle of a celebrity without having the financial wherewithal to pull it off?

In all likelihood those folks were trying to live someone else’s life instead of their own.

I’ve seen many instances of the first example, and the story is almost always the same.

As a youngster, the parent had grand illusions of becoming a professional athlete only to realize a few years later that they didn’t have the talent necessary to make it happen (sheepishly raising my own hand on this one).

Then, after a few more years had passed, the disillusioned athlete had a child and saw an opportunity to live out their own shattered dream through the child.

The “coaching from the bleachers” episodes usually began with the child’s first practice session.

As you’ve no doubt seen, that usually results in a miserable time for everyone involved, including the parent.

The second example is just as bad…

Trying to “keep up with the Joneses” usually doesn’t end well either.

Borrowing money to buy a fancier house, a bigger car or a faster boat than one’s income will allow provides short-lived satisfaction, but that always fades quickly once the bills start coming due.

It’s a fact of life that not every child is destined to become a famous athlete or live the life of a fabulously wealthy celebrity. The folks who are should consider themselves blessed to be among the lucky few.

— If your child decides to give baseball, football or some other sport a try, let them enjoy it…

— Let them strike out. And then strike out again.

— Let them miss the field goal. And then miss it again.

— And if they are able, let them succeed beyond their wildest dreams.

— But through it all, let them be a kid.

You can, and should practice with your child IF they ask you to do so, but let the coaches do the coaching while you enjoy the team practices and games from the bleachers.

If your child has a true talent for the sport, that fact will become obvious soon enough.

If not, they had fun while learning the importance of sportsmanship and teamwork.

When all is said and done, you’ll know you gave your child the best gift a parent could ever give…

You let them enjoy being a child.

As far as trying to “keep up with Joneses” is concerned, there really isn’t a lot to say about it that isn’t fairly obvious.

However, I will say this…

You’ll live your best life if you make an effort to live your own instead of trying to live someone else’s.

Let the movie stars and professional athletes enjoy their millions (and endure the heartache and worry that often come with it).

In short, enjoy the life you were destined to live. Trust me, you’ll enjoy it a lot more than you would if you tried to be someone you’re not.

To finish up, check out this short video featuring 15 Albert Einstein life quotes that speak to this very topic. I don’t necessarily agree with all of them, but some of them could potentially be life-changing.