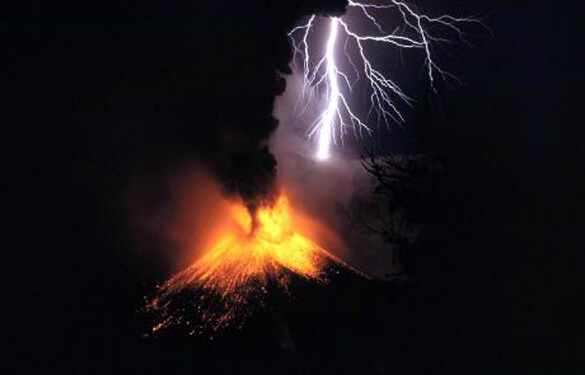 Our world truly is an amazing place. Natural phenomena that can awe, terrify and inspire occur somewhere on our planet each and every day.

One phenomenon that can trigger all those feelings at once is lightning.

Virtually everyone has experienced the power and beauty of a lightning strike while waiting out a passing thunderstorm, but did you know volcanoes can produce their own lightning strikes even on a clear and sunny day?

Well, they can, and many of these instances of volcanic lightning have been captured in breathtaking photos over the years.

As a case in point, the awesome photo of volcanic lightning featured above was taken by photographer Oliver Spalt during an eruption of Indonesia’s Mount Rinjani in December, 1993.

According to the folks at LiveScience, volcanic lightning is caused by static electricity that’s generated when  from particles of ash rub together in dense ash clouds that form near the ground.

And if you look carefully at the picture above you can literally see it in action!

While few among us will ever witness volcanic lightning in person, we can still enjoy its beauty in photographs thanks for talented (and brave) photographers like Mr. Spalt.

To finish up, the fantastic short video below shows actual lightning bolts being created by the 2020 eruption of an active volcano in the Philippines. Check it out!

Note: You can watch the video at full screen by clicking the little “square” icon in the lower-right corner of the video after it begins playing.