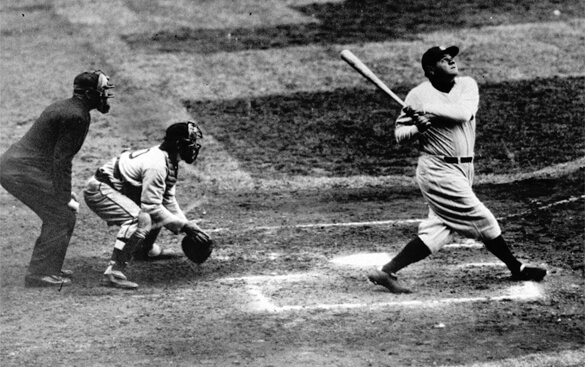 “Every strike brings me closer to the next home run.“
-–Babe Ruth

Have you ever pondered how some people reach great success in life while others who work just as hard always seem to struggle just to survive?

I have thought about that many times over the years, and I always seem to come to the same conclusion…

While hard work is important for attaining great success, it comes in a distant second to having the right mindset.

Here’s one of history’s greatest examples…

The late, great Babe Ruth is generally regarded as one of the greatest sluggers in the history of baseball.

Know in his prime as “The Sultan of Swat”, the Babe’s swagger as he walked up to the plate put fear into the hearts of even the best pitchers of the day because he was always a serious threat for clobbering the ball over the outfield fence.

But guess what? The Babe didn’t just hit a lot of home runs…

He also struck out.

When Babe Ruth swung his mighty bat, he really swung it.

Bunting? What in the world is that?

Stinging line drives and grounders “through the hole”? Not today, unless they occur by accident.

Every time the Babe swung a bat it was with one intention: To send the ball flying as far as it could possibly go within the outermost boundary set by gravity.

Yes, that was aggressiveness to the extreme, and those mighty swings of the bat resulted in plenty of “swings and misses”.

But when he connected there was rarely any doubt about where the ball would land. More often than not, somewhere in the distant bleachers, or even beyond.

And often in game-winning situations.

Of course he also hit his fair share of singles, doubles and triples throughout the course of his career, but he considered those to be mistakes. Any time the ball failed to make it over the outfield fence he considered that at-bat to be almost as big a failure as a strikeout.

Lots of modern-day baseball experts opine that the Babe wouldn’t be able to succeed in the Majors today given the way the game and the players have changed since that golden era.

They could well be right, but truth be told, it doesn’t matter. Babe Ruth was a giant in the baseball world of his day, and that’s all that really matters. His mission on the field was to hit as many homers as he possibly could, and the fans (and his bank account) absolutely loved it.

It can be a struggle just to make it from day to day in the 21st century, but there are still folks who prefer to swing for the fences every chance they get.

Many of them will strike out and we’ll never even know their names, but a relative few will find success beyond their wildest dreams.

The saying “Go big, or go home.” is often used in a lighthearted way in situations where the outcome of an endeavor won’t cause much a ripple either way.

Babe Ruth walked into the ballpark every day with the intention of swinging big, and to say it payed off for him would be an understatement.

And just in case you’re wondering…

Although the Babe struck out many times during his career, there were plenty of others who struck out even more.

Perhaps the best example of all is legendary outfielder and Hall of Famer Reggie Jackson, the man who holds the Major League Record for racking up the most strikeouts as a hitter.

Like the Babe, Reggie is widely regarded as a home run king after hitting 563 career homers, but he also “fanned” a grand total of 2,597 times.

But guess what? The “King of Strikeouts” also earned the nickname “Mr. October” for his uncanny ability to knock the ball out of the park at critical moments in World Series games.

Whether it’s the game of baseball, the business world or any other area of life, the “players” who aren’t afraid to “swing for the fences” are the ones who typically rack up the biggest wins.

To finish up, here’s a short video featuring the Babe hitting dozens of his towering home runs. Enjoy!

Note 1: This is one of those videos that really needs to be viewed at full screen. Simply click the “square” icon in the bottom right corner of the video after it begins playing.

Note 2: Some of the scenes in this video don’t have an accompanying audio track, but the action on the field speaks for itself.