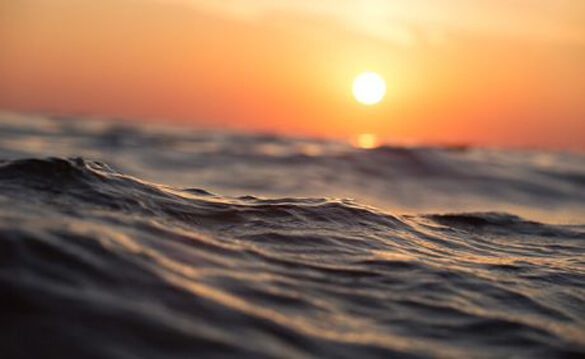 Question from Kelly:  In school they taught us that the earth’s rivers are constantly dumping salt into the oceans.

If that’s true why aren’t the oceans getting saltier?

It seems to me that after all these billions of years the water in the oceans should be too salty to even support sea life.

So why don’t the oceans keep getting saltier as more and more salt is carried down the rivers and deposited in the oceans? Surely I’m missing something?

Rick’s answer: Kelly, what you were taught in school is indeed correct.

Every river that empties into an ocean deposits at least some dissolved salt into that ocean’s water.

And you’re right that the constant flow of new salt into the world’s oceans should increase the salinity of sea water over time.

And truth be told, it does!

The world’s oceans are indeed getting saltier by the day, but the rate of the increase in salination is so incredibly small that we can virtually ignore it.

There are several reasons why the saline levels in the oceans are increasing at such a slow rate.

First of all, there’s the sheer volume of water in the oceans…

To put that amount of water into perspective, if you had a swimming pool that is one mile wide, one mile long and one mile deep, it would take over 321 million of those humongous pools to hold all the earth’s ocean water!

Of course most of us are used to thinking of water volume in terms of gallons, so imagine this…

The amount of river water entering an ocean at any point in time is absolutely minuscule compared to the amount of water that’s already in the ocean.

And since the amount of dissolved salt in river water is minuscule compared to the water volume itself, it’s easy to see why it takes so long for the amount of salt in the ocean to increase by a measurable amount.

But there’s also another factor that contributes to the ocean’s virtually stable level of salinity: The existence of “Salt Sinks”.

In a nutshell, salt sinks are processes that actually remove salt from the oceans’ water.

1 – Some salt literally sinks down to the ocean floor and gets trapped in the sediment that is constantly building up down there.

And any salt that’s trapped in sediment isn’t dissolved in the water above.

2 – Another salt sink is the countless sea creatures that live in the oceans.

Their bodies ingest salt from the ocean water, and that ingested salt becomes in trapped in the tissues of the animal’s body.

And any salt that’s contained inside the tissues of an animal isn’t present in the water.

What’s more, when a sea creature dies, one of two things happens:

a) It’s either eaten by another animal, after which the salt contained in the first animal becomes a part of the animal that consumed it.

b) The dead animal sinks to the bottom of the ocean where its remains and the salt contained within it become part of the sediment.

As you can see, very little of the salt that get ingested by a sea creature’s body is ever released back into the ocean.

Those are just two types of salt sinks that come to mind. There are actually many others that I won’t go into here.

Bottom line: Just as you expected all along, the earth’s vast oceans are indeed getting saltier by the day – but the rate of increase is so small we can safely ignore it.

By the way, as salty as ocean water is, there are actually bodies of water on the earth that are a LOT saltier than the oceans.

In fact, the water in the Dead Sea is so salty you literally cannot sink below the surface when you’re in it!

Intrigued? Check out the short video below.