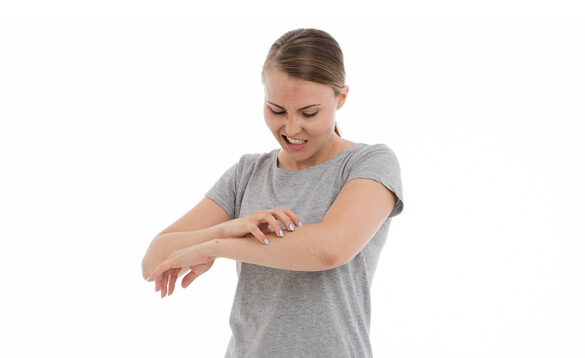 Have you ever scratched an itch and felt relief, but then immediately start itching someplace else?

It happens all the time, right? Well, it isn’t your mind playing tricks on you.

Scratching an itch really does cause you to itch in other places.

And as you’ve also probably noticed, the relief you feel by scratching the original itch can be short-lived.

Yeah, the itch goes away, but often the same place will start itching again even worse than it itched before you scratched it!

Well, there’s actually a scientific (and medical) reason why this happens…

According to research reported by LiveScience and WebMD, scratching an itch causes the body to release a pain-fighting chemical called serotonin.

And guess what? One of the ‘side-effects’ of Seratonin is itching!

Here’s how the folks at LiveScience explain it:

“Why does scratching an itch only make it worse? As it turns out, a brain-signaling chemical released in response to scratching has some unintended effects, scientists say.

Scratching an itch provides a bit of relief at first. It works because scratching causes mild pain, so the neurons in the spinal cord transfer pain signals instead of itch signals up to the brain.

But then the brain releases a neurotransmitter called serotonin to dampen the pain, and in a new study, researchers found that this serotonin release also activates certain neurons in the spinal cord, which creates more itching sensations.“

Apparently the release of seratonin causes other parts of the body that are on the brink of itching anyway to start itching – sort of like pushing something over the edge of a precipice.

That’s why the experts recommend that you never scratch an itch. They say you should lightly rub it or pat it instead.

While they’re probably right, I can tell you from personal experience that some itches simply must be scratched in order to find any acceptable level of relief. Just sayin’.

To finish up, here’s a short video that explains the relationship between itching and scratching much better than I can: