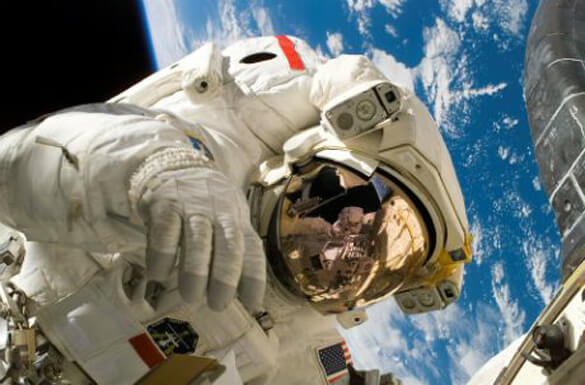 Remember watching the Space Shuttle astronauts walk out of the hangar and towards the shuttle as they were preparing to climb aboard?

If so, you probably noticed how they always entered the shuttle wearing orange spacesuits.

But then you probably noticed something interesting when they went on their space walks: they always wore white space suits instead of the orange ones they were wearing when they first boarded the shuttle.

Have you ever wondered why they didn’t just wear the same spacesuits all the time instead of always switching to the white ones before they exited the spacecraft for a space walk?

To find the answer to that question I turned to my favorite science website, LiveScience…

It turns out that the orange and the white spacesuits were designed for two different purposes.

The primary concern during the shuttle’s launch into orbit was the protection of the crew members in case something went wrong and they had to abandon the shuttle before it left the earth’s atmosphere.

First of all, the orange suits were equipped with parachutes to help the astronauts (hopefully) make it back to the ground (or water) safely in the event they had to abort the mission during the ascent and exit the shuttle for some reason.

Those suits were also equipped with radios and various other pieces of survival gear as well.

The reason those particular suits were orange is because that shade of orange happens to be one of the easiest colors to spot during a search for a missing person because they contrast so well against almost any type of landscape (including water).

You’ve probably noticed that hunters and people working in a highway construction zone wear “blaze orange” vests. Well, they wear those orange vests for the same reason: To be easily seen.

Now that we know why the shuttle astronauts wore orange during their ascent, lets talk about why they wore white during their spacewalks…

The primary reason why white is the preferred color for spacewalking astronauts is because the color white reflects the sun’s rays and heat extremely well.

While the top layer of earth’s atmosphere (the Exosphere) extends 6,200 miles from the earth’s surface, the atmosphere at the altitude the space shuttles orbited at is much too thin to block all but a tiny fraction of the heat that’s expelled by the sun.

That means NASA had to take extreme care in designing the spacesuits used for spacewalks to ensure that the astronauts didn’t get “cooked” by the sun’s rays.

And while there are other protections against the sun’s powerful rays built into those special spacewalking suits (officially called Extravehicular Activity suits, or EVA suits for short), the astronaut’s first layer of protection was the suit’s white color.

In addition to their powerful reflecting ability, the fact that those EVA suits are white serves another important purpose…

White stands out extremely well against the darkness of space, and that makes it a lot easier for the other astronauts to keep tabs on the space walkers while they’re outside the shuttle maneuvering against the black backdrop of open space.

Now that you know why NASA chose to use two different colors for their shuttle astronauts’ spacesuits, check out this fantastic short video of a world-record skydiving jump from 24 miles above the Earth’s surface!

Note: As always you can watch the video full-screen by clicking the “square” icon that pops up in the lower right-hand corner of the video after it begins playing.