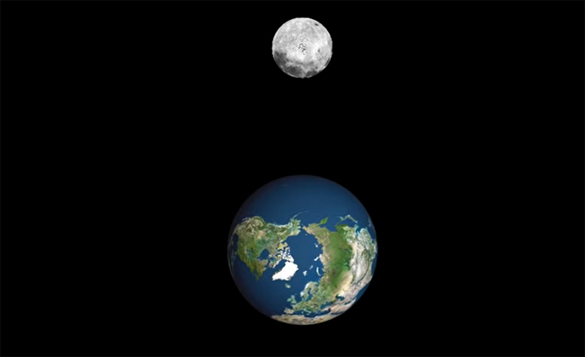 Question from Danielle:  I have what’s probably a really stupid question.

Why do we always see the same side of the moon?

I was pointing out the “man in the moon” to my 7 year old daughter when I realized he’s always there every time I look up at the moon.

Why do we always see that same side of the moon and never the other side?

Rick’s answer:  That isn’t a stupid question at all, Danielle. And the answer lies in one word: Gravity!

As you probably know, the earth and moon are gravitationally attracted to one another. Even though gravity is invisible to us, it’s very real.

The thing is, the moon is large enough that the gravitational force the earth exerts on it is a lot stronger on the near side of the moon than it is on the far side, and that prevents the moon from rotating as fast as it would otherwise.

And although the moon still rotates on its axis, the speed of its rotation is in near perfect sync with the speed with which it orbits around the earth.

That syncing of rotation and orbital speed causes the same side of the moon to face the earth at all times.

This phenomenon is called “tidal lock” and it affects virtually all the moons in our solar system, not just our own.

I know this explanation was probably not the best. That’s why it might help to see this tidal lock in action by watching the short, but enlightening video below.

That’s all there is to it, Danielle. Thanks again for asking such a great question!